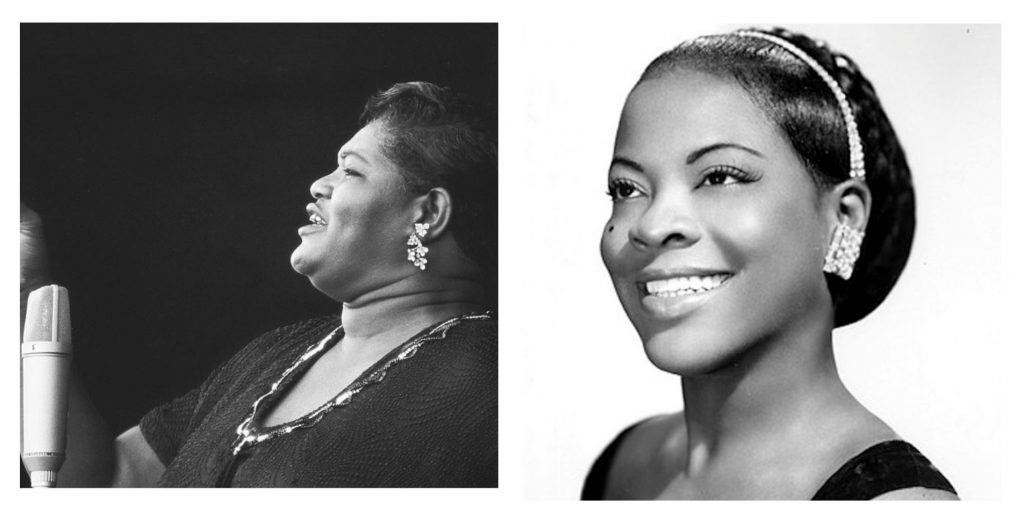 There are so many inspiring women within Blues music history. Here I’ll talk about two of my favourites: the “Mother of Rock ‘n’ Roll”, Big Mama Thornton, and an artist with a fascinating story and varied career, LaVern Baker.

The careers and histories of these artists reflect many of the challenges around racism that were common for African American artists at the forefront of Blues music. Their stories are of struggle, but ultimately, both are examples of kick-arse females, determined to have their talent heard despite of a system that was rigged against them, and have enduring legacies as a result. 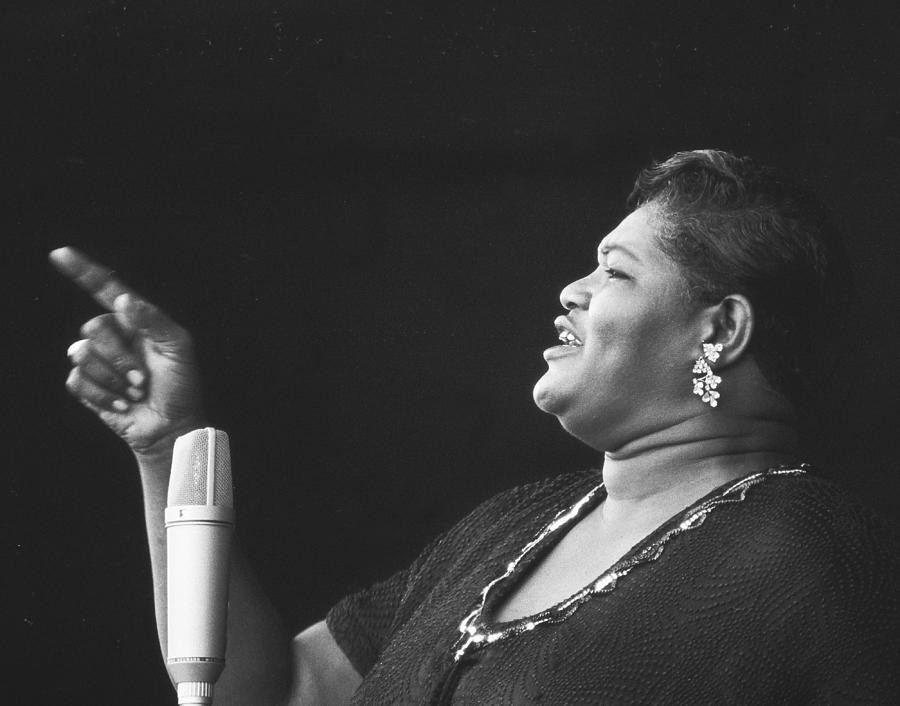 Willie Mae Thornton, known as “Big Mama Thornton” after her powerful vocal style and commanding stature and presence, is one of the founders of Rock and Roll. She was born in 1926 in Alabama and grew up surrounded by church and spiritual music as her father was a Baptist minister and her mother a church singer. She got her start in the Blues world as many other artists did at the time: performing in a travelling cabaret show.

An obvious stand-out star, she moved to Houston in 1948 to pursue a career as a recording artist in the vibrant Texas music scene. She was the original artist to record “Hound Dog” in 1953, which reached number 1 in the Billboard R&B charts for 7 weeks and sold 2 million records. However, three years later, Elvis Presley released his version which sold over 10 million copies, and so he is often incorrectly credited as the original artist associated with this song.

In 1965 she travelled to Europe as part of the American Blues Folk Festival and in 1969 she recorded her most successful album, “Stronger than Dirt”. Her profile was further boosted by an unlikely source. Thornton wrote the song, “Ball ‘n’ Chain” in the early 1960s, but this would not become a hit for her as the record label decided not to release the record. Janis Joplin was a fan of Thornton’s and covered the song in her famous performance at the Monterey Pop Festival in 1969 and released it on the subsequent album, “Cheap Thrills”. While Thornton would not receive royalties as the record label owned the song rights, Joplin invited Thornton to open for them on tour as a mark of respect, thanks, and recognition.

By the 1970s her health was under threat due to a stressful lifestyle of touring and performing, and the heavy drinking habits that accompanied this for her and many of her contemporaries. She continued to perform, touring Europe again in 1972 and starring at several notable jazz festivals such as Newport Jazz Festival in 1973 alongside Muddy Waters and B.B. King. In 1973 she achieved something that she most likely considered to be the pinnacle of her career: she released a gospel album, “Saved”. She had dreamed of recording this piece to honour her musical roots, and you can hear the passion in her vocals.

Sadly, Thornton passed away in 1984 aged 57 from liver and heart problems.  Her legacy is far-reaching: she was inducted into the Blues Hall of Fame in 1984 and “Ball ‘n’ Chain” is included in the Rock and Roll Hall of Fame list of the “500 Songs That Shaped Rock and Roll”. I think something she might be most pleased with is the establishment in 2004 of the nonprofit, Willie Mae Rock Camp for Girls. Its mission is to give free music mentoring programmes to “cisgender and trans girls, women and/or gender nonbinary youth and adults”. Their mission is beautiful:

“We believe that positioning people who have historically been silenced because of their gender and racial identity to experience the burst of confidence and self-efficacy that comes from learning to play an instrument, writing original music, performing, and engaging in social justice conversations with peers and mentors across the socio-economic spectrum, builds the next generation of female, trans, and/or gender nonbinary musical activists who will define leadership, creative innovation, and civic engagement for generations to come”

Thank you, Big Mama Thornton, for the music, passion, and leaving such an inspiring legacy. Her “Hound Dog” is a particular favourite in the Blues dance community, especially since the fantastic teacher and performer, Dexter Santos, choreographed a routine that is known across the world- we’ve even taught this in our Blues classes here in London! We certainly remember and pay our respects to the original artist. 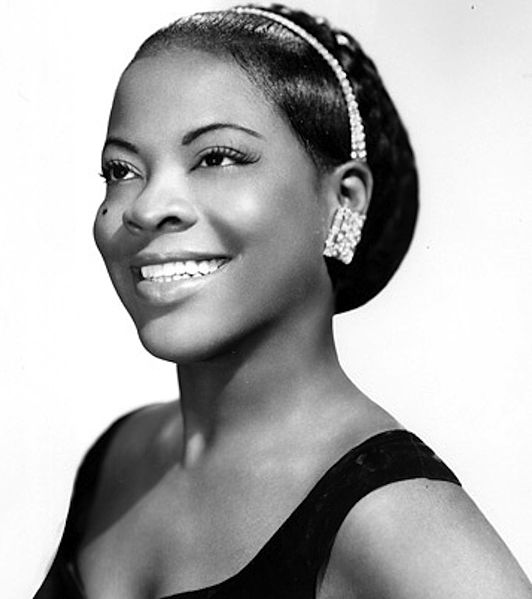 LaVern Baker was born Delores Evens in Chicago in 1929. Music was certainly in her genes, as two of her aunts were singers, one being the Blues legend, Memphis Minnie! She originally found success working at a Chicago cabaret club with an act called “Little Miss Sharecropper”, a stereotypical, country bumpkin role that many African American performers were limited to at this time due to racial discrimination. Realising the potential in her talent, she set out as LaVern Baker in 1951 to begin her recording career.

She had her first hit record in 1955 with “Tweedly Dee”, an uptempo, Latin rhythm tune, which reached number 14 in the national US charts and number 4 in the R&B charts. Sadly, far from this launching her into fame and fortune, the song was copied and released by a Russian-Jewish American artist, Georgia Gibbs, whose version topped the charts reaching number 1. Baker sued but was unsuccessful, as were so many other Black artists who were also victims of “whitewashing” at the time. A widely told story is that Baker took out a life insurance policy before taking a flight to Australia and named Georgia Gibbs as the beneficiary. Baker quipped:

You need this more than I do because if anything happens to me, you’re out of business!

In 1969 her life took an unexpected turn as she travelled to Vietnam to play for the US troops. She fell seriously ill with pneumonia and spent several months recovering on a military base in the Philippines. Once healthy again, she took up a job managing the entertainment of the Marine Corps base and remained there for the next 22 years!

Baker returned to the USA in 1988 when the base closed. That same year she performed at Madison Square Garden for Atlantic Records’ 40th anniversary. She then went on to diversify her career into the 1990s, working on several film soundtracks and making her Broadway debut in the hit musical, Black and Blue. Recognition soon followed and she was the second female solo artist to be inducted into the Rock and Roll Hall of Fame in 1991 (after Aretha Franklin in 1987).

Unfortunately, she was diagnosed with diabetes in 1992 and had both legs amputated, but he continued to perform from a wheelchair until ill health forced retirement. Baker died of cardiovascular disease aged 67. Heartbreakingly, she was buried in an unmarked grave in New York until local historians later raised money for a headstone to be erected in 2008.  She is now respectfully laid to rest- an end far more befitting of her talent and cultural contribution.

While her “hits” were largely uptempo R&B songs, she has many Blues tracks to her name, and one of my favourite of her records is a Bessie Smith covers album. Her version of “Empty Bed Blues” is one of my all-time favourite songs to dance to. I love the sassy feel to the song- it has a sadness, but also a determination that comes across in her beautifully expressive voice, just gorgeous!

It’s been inspiring to find out about these talented, strong, and determined super-women that helped to pave the way for later generations of artists. I’m going to continue my journey into researching Blues artists through history and I look forward to sharing more with you soon!